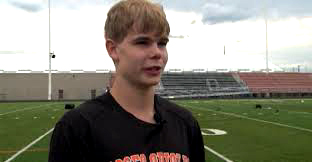 “A nice word can go a long ways.”  Those are the words of 17-year-old Kevin Curwick of Osseo, MN. I can attest to their truth.

When I was in my teens, I went with a friend to one of our small town’s pharmacies. I wasn’t there to shop. In those days I had no money. When my friends stopped in at Joe’s Corner Café after school, I went along, but without the necessary dollar, I didn’t eat unless one of them took pity on me and offered me some of their chips (fries) or a drink of their pop (soda.) So, in the drugstore, my friend shopped and I wandered the aisles, while the woman tending the store made small talk with me. I was at an age when I felt like an awkward, unattractive blob, and as I lingered over the eye makeup counter, she told me I had beautiful eyelashes. I knew it wasn’t true, as my eyelashes are very average and they happen to be stuck on the hooded eyes I inherited from my father’s side of the family. Nevertheless, I left that store glowing. Glowing.

It being a small town, I’m positive the woman knew my family history: that my home life was chaotic and that there was little money for the extras a teenage girl longs for. So she offered me a compliment, no doubt in the belief that I needed a bit of cheering. It seemed like a small thing, but the fact that I remember it after many decades speaks to the power of a “nice word.” Thank you Mrs. Holroyd.

I recalled this experience when I heard about the Twitter campaign of Kevin Curwick called Osseo Nice Things. Unlike kids who use Twitter to post negative cybertalk and to bully, Kevin decided to lift the spirits of classmates who were being bullied online by publishing only compliments about them. Comments such as, “Is going to be a famous musician one day. Katie Ray Murray.” Or, “Only knows how to be positive. Gabbi Horsford.”  For once, this is behavior you want to “go viral.” And it has. More and more similar Twitter sites are springing up in Minnesota, across the country, and around the world.

Over the years, I’ve also learned that, while a compliment given directly to someone is appreciated, it carries much more power if it comes from a third party. I can tell my son or daughter how proud I am of them and they’ll likely shrug. After all, they hear it from me as often as they deserve it. So I’ve taken to telling other people how proud I am of them, and, occasionally, the compliment will get passed along as, “Do you have any idea how proud your mom is of you? She just told me about XYZ.”

In the same way, it feels great to have your boss tell you you did a good job. But how much better it would feel if someone you just met said, “Oh, you’re Erik. Your boss told me you did a fantastic job on that Avery assignment.”

A mother, a boss. Anyone. If they think enough of a person to tell a third party, who, in turn, will offer a “nice word” when the opportunity arises, that’s a compliment to take to heart. And perhaps remember. The way I remember the time a considerate shop owner told an unhappy teenage girl she had lovely eyelashes.

Wouldn’t it be wonderful if, instead of using Twitter to toot our own horn and promote our successes and the minutiae of our lives, we use it to make other people feel good about themselves, the way Mrs. Holroyd made me feel so many years ago?

It’s worth a try.