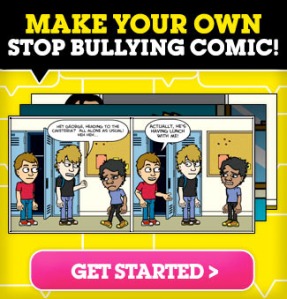 You don’t think about the Cartoon Network in relation to bullying, unless it’s the shenanigans that go on between Tom and Jerry or other roughhousing characters. But the network is doing its part to combat bullying, with a portion of its  website dedicated to that effort. Young people can go to the STOP BULLYING, SPEAK UP site to watch videos about how to stop bullying (subtitled in Spanish and Farsi), can earn collectible badges by speaking out against bullying, and can even design a comic of their own. There is a checklist and guide for educators, a guide for parents, a timeline and strategies for launching bullying prevention initiatives, a poster to download, suggested reading (all from Simon and Schuster), and even a poll.

Even though it’s ironic that the Cartoon Network with its bonk ’em bash ’em cartoon mayhem is stepping up to prevent bullying, I recommend the site for anyone who wants to join the fight. It’s a site where young people especially can learn and have fun at the same time. And when it’s fun, learning sticks.