BULLIED BY THE GOVERNMENT

“I want everybody treated fairly in this country. We have never gone wrong when we expanded rights and responsibilities to everybody.”

Those were the words of President Barack Obama in May, 2012, when he stated his current position on gay marriage. Although marriage between two people of the same gender is illegal at the federal level and he once opposed it, in this election year Obama’s opinion has “evolved” and he has come to believe the law should be changed.

Even if the federal prohibition remains in place, those couples who wed in states where gay marriage is legal would probably not be charged with a federal offense, or worse, die as a direct result of breaking this federal law.

There is another federal law against an action that is legal in some states, but, nevertheless, subjects people to unfair treatment. Enforcing that federal law could result in death, or at the very least, in a compromised quality of life for some citizens. President Obama, however, disagrees with changing this law and is even going out of his way to use the powers of government to enforce it.

This law is the federal prohibition against the cultivation and use of medical marijuana. With regard to this natural plant, the federal government and President Obama are casting themselves in the role of big-time bullies. This, despite candidate Obama’s 2008 statement that medical cannabis was an issue best left to state and local governments. “I’m not going to be using Justice Department resources to try to circumvent state laws on this issue,” he vowed.

Then he won the election, and gradually that policy changed. Over the past year or so, there has been a crackdown on medical marijuana in the sixteen states and the District of Columbia where the plant is legal.

Can you say hypocritical?

Since Obama has admitted to being a user of marijuana himself as a young man, can you say it louder? HYPOCRITICAL!

A new biography by David Maraniss, Barack Obama: The Story, details the extent of Obama’s involvement with the drug. He was a member of a group in Hawaii called the “Choom Gang.” (Choom is a slang term for pot.) According to Maraniss’s book, Obama and his friends figured out how to get the most out of their cannabis experience. They would close themselves up in a van they called “the Choomwagon” and fill it with smoke to get total absorption, or what they referred to as “TA.”

Realizing that over 70 percent of the country’s population supports medical marijuana and 56 percent supports the legalization of marijuana, period, even House Minority Leader, Nancy Pelosi, disagrees with Obama, announcing, “I have strong concerns about the recent actions by the federal government that threaten the safe access of medicinal marijuana to alleviate the suffering of patients in California and undermine a policy that has been in place under which the federal government did not pursue individuals whose actions complied with state laws providing for medicinal marijuana.” (May 2, 2012)

It’s not only the legal users of cannabis who are being targeted. Even landlords who dare to rent to legal cannabis dispensaries are threatened with having their property seized.

“What does it mean whether you hold the deed or the title to your business or property if the government holds the power of life and death over that business or property? Such machinery already exists. The government can find some charge to bring against any concern it chooses to prosecute. Every businessman has his own tale of harassment. Somewhere a perversion has taken place. Our natural, inalienable rights are now considered to be a dispensation of government, and freedom has never been so fragile, so close to slipping from our grasp as it is at this moment.”

Perversion, indeed. Since Obama took office, government agents have raided “more than 200″ state-approved medical marijuana facilities, according to Kris Hermes, spokesperson for Americans for Safe Access (ASA), including an IRS/DEA raid on Oaksterdam, a medical marijuana training school that taught everything from horticulture to business to the legal ins-and-outs of running a dispensary. It did not distribute marijuana. (Can you say freedom of speech?)

Alcohol is legal. But according to the Centers for Disease Control and Prevention (CDC), it kills nearly 75,000 Americans every year. This figure does not include homicides where alcohol is involved. Nor does it mention the millions of other lives ruined by an alcoholic’s addiction.

Again according to the CDC, cigarettes “account for an estimated 443,000 deaths, or nearly one of every five deaths, each year in the United States. More deaths are caused each year by tobacco use than by all deaths from human immunodeficiency virus (HIV), illegal drug use, alcohol use, motor vehicle injuries, suicides, and murders combined.”

Over many thousands of years of use, how many deaths have been proven to be directly caused by marijuana? Answer: Zero. Zip. Zilch. Nada.

Can you say irony?

Once, cannabis was a respected component in a physician’s arsenal. And, as with prescription drugs and alcohol, cannabis has different effects on different people. If a minority of users experience irritability, hyperactivity, etc., is that a legitimate reason for keeping it illegal? If the answer is yes, why aren’t prescription drugs that actually kill people banned? Why isn’t alcohol banned? Tobacco?

Can you say big bucks?

Can it be that the drug companies can’t make a profit from cannabis? At least not yet, although the pharmaceutical industry is likely working frantically to isolate all the hundreds of useful compounds in cannabis in order to produce them synthetically, patent them, and make billions of dollars from them. They already market one compound, THC, the psychoactive ingredient in cannabis, sold as Marinol, which is expensive and produces marginal results. There are, however, hundreds of other compounds present in this miraculous plant, one we can grow for free in our back yards, one that might be a cure for cancer and other miserable diseases. Why isolate those compounds when they might be more effective working together? Again, can you say big bucks?

Did you know that: 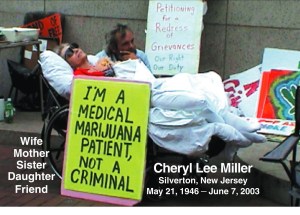 I could continue indefinitely with interesting facts about this amazing plant, but it is not my intent to give a lesson on cannabis, only to point out how the government bullies its citizens in this matter and to raise the awareness of those who believe the tales told about the “evil” weed, of which I used to be one, until I did my research. There is plenty of information already available to those with minds open enough to seek it and I have included some links in this post.

Another question: If smoking marijuana is as debilitating as the “experts” would have us believe, how did Barack Obama ever rise to the office of president? Since pot is touted as a gateway drug, he should be a babbling heroin addict or, since it kills motivation, he should be sitting in a corner somewhere dreamily contemplating a blossom and saying, “Du-u-de.” Those against the use of cannabis in any form would likely be amazed to learn how many very successful and professional people use it on a regular basis. Most of them have to break the law to do so.

I do not use marijuana, either medicinally or recreationally. But someone I love does. I believe that person would not be alive without it. So far, that person is using it legally, although it is becoming more difficult to get and more expensive, thanks to the government crackdown. If the government continues down the path it is currently on, that person will likely have a decision to make: break the law or die.

Hmmmm …. Eenie, meenie, miney, mo. Let’s think—for about a nanosecond. If it comes to that, this law-abiding citizen will help my loved one break the law. It’s a nonsensical, unjustifiable, antiquated law that needs to go.

But meantime, will President Obama, the Department of Justice, and the DEA continue gunning for those hurting people who are helped by medical marijuana?

I’m told by some that the president has no power to change the way the Department of Justice enforces the law regarding marijuana. I have difficulty believing that, unless, of course, he’s held in check by the power of the mighty pharmaceutical industry.

“I want everybody treated fairly in this country. We have never gone wrong when we expanded rights and responsibilities to everybody.”

It’s time for the president to walk the walk, not just talk the talk. It’s time for opinion on cannabis to evolve, the way it has with gay marriage. It’s time.

Otherwise, can you say BULLYING?

I strongly urge everyone to become educated on this subject. For an objective look, watch this September 15, 2011 video documentary “All New Cannabis Documentary.” It’s long, but worth your while, especially if you watch with an open mind.

Another eye-opening documentary is “Cannabis Cured Cancer,” narrated by Peter Coyote, which addresses whether or not the chemicals found in marijuana can prevent and heal deadly cancers and replace debilitating drugs. World-renowned scientists in the field of cannabinoid research explain and illustrate their discoveries about this ancient medicine.

To learn about juicing the fresh marijuana plant, watch “Leaf.”

“Cured, A Cannabis Story” tells how one man cured his skin cancer with the use of cannabis oil.

“Run From the Cure” describes the effects of using cannabis oil by people with brain tumors.

Please take the time to watch these videos and read the myriad of information available to seekers. No one should have to live in fear that their own government will keep them from using the plant that keeps them functioning or alive.

Yes, President Obama, it’s time to expand rights and responsibilities to all citizens of this country. It’s time to treat everyone fairly.