MEGAN LANDRY: “BULLYING IS ABOUT POWER” 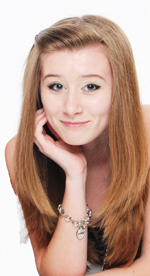 I can’t believe a year has passed since I wrote my first post for this blog. Even though I post only once a week, sadly, bullying is in the news so often I could probably post every day and not run out of material. Mostly it’s distressing news. Today, I’m leaning toward the positive. I’m going to introduce you to a young Canadian who is using her music to battle bullying—and earning recognition for her efforts.

When fifteen-year-old Megan Landry became the target of school bullies, she turned to her singing and songwriting to share her pain. Last April, her song “Stronger” earned her recognition as the “Top Female Artist” in the invitation-only competition “Archimedia STAR,” sponsored by Archimedia Studios, a thirty-year-old branding, marketing, and public relations company. Archimedia STAR focuses on independent, unsigned talent.

Megan’s self-produced video was selected from over 400 country, pop, and rock entries. “Her honest and genuine music and lyrics deliver a powerful message to those that have fallen victim to bullies,” explained Archimedia.

“Bullying is about power,” says Megan. “If people were empowered to be okay with themselves, who they are — comfortable in their own skin — then the bully becomes powerless.  Regardless of where that bully is from … the school yard, the office or maybe even at home … people need to love themselves and don’t let anyone tear them down. That’s what my song is about. ”

Love yourself. Empower yourself. Wise words from a fifteen-year-old. Keep your eyes on this young woman. You’ll be hearing more from her in the future. And I’ll bet those who bullied her will soon regret the actions that kept them from being friends of the famous Megan Landry.

In the meantime, watch her award-winning video.